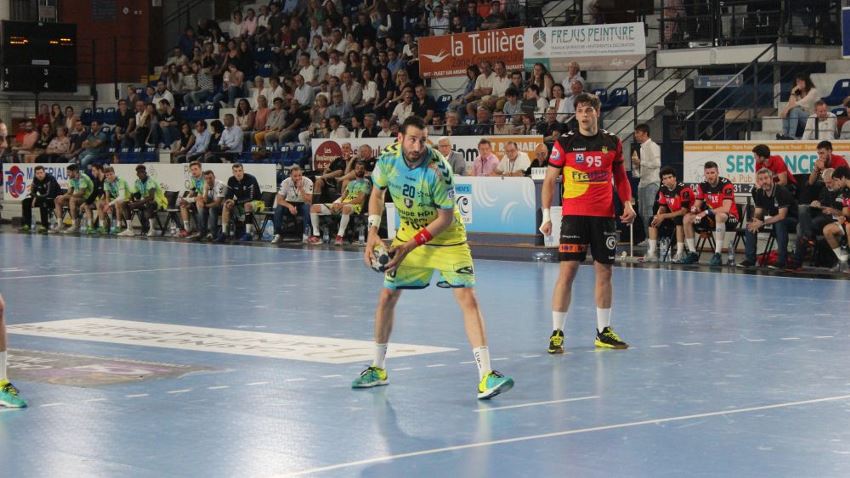 With Dani Sarmiento and both right backs Adrien Dipanda and Xavier Barachet missing due to injuries, the situation did not look good for Saint-Raphaël before their Group B match in the EHF Cup Group Phase against La Roija. But after struggling for thirty minutes, last season’s finalists took command with a five-goal advantage in the middle of the second half, which was enough for them to grab their first win of the season.

The first half of the match was an even one, even though Saint-Raphaël once held a three-goal advantage. But that was more of a passing phase than anything else, as the visitors were quickly back into the game.

Despite playing without Dani Sarmiento, Xavier Barachet and Adrien Dipanda, the French side managed to find some good attacking solutions thanks to Hampus Jildenbäck, the left-handed Swedish winger, who produced a fine performance despite playing in the back court. On the other side, Junior Scott and Imanol Garcianda were the most prolific scorers for La Roija, with four goals each in the first half. And it was thanks to a last-second goal from Scott, the young French player, that La Rioja were ahead by one at the break, 15:14.

The home side came back with more aggressive defensive intentions. This was demonstrated by only conceding four goals in the first 18 minutes of the second half. All the while, Saint-Raphaël managed to gain a clear advantage, which reached five goals when youngster David Eponouh scored his first goal. Despite trying to change things around once more, La Rioja had lost their momentum. Scott and Garcianda, who were La Roija’s best players on the court in the first half, did not score after the break.

Using their experience in the final seconds of the game, Saint-Raphaël were able to retain their advantage to gain their first victory in this season’s EHF Cup Group Phase.