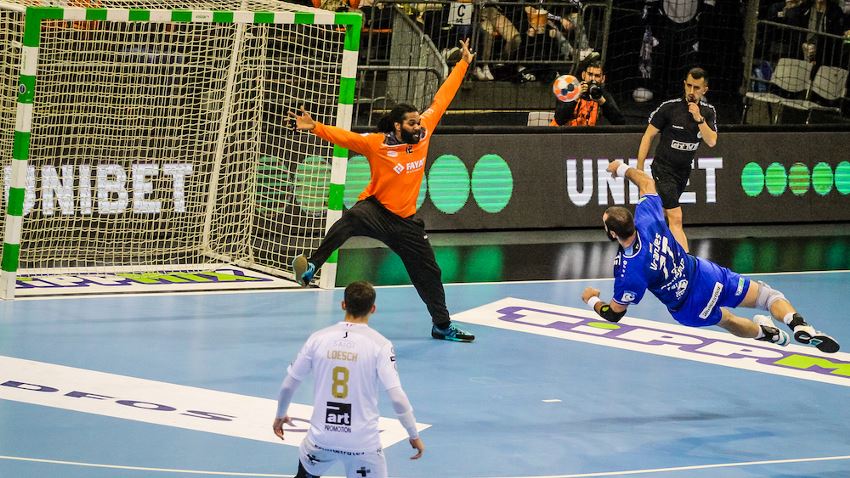 Saturday evening’s game between Grundfos Tatabanya KC and PAUC Handball saw the Hungarian side with a chance to put in a four-point gap over their French rivals, if they were to take their second win of the EHF Cup group phase.

After both took one point in last week’s games, BM Logroño La Roija and Füchse Berlin faced each other tonight in Spain. The German side had the opportunity to break away on the standings, potentially moving four points ahead of their opponents, but La Roija clinched a 26:25 win in the final seconds.

Despite not having won a game in the group phase so far, the French side showed no apparent signs of stress in the first half. They started off perfectly, immediately taking a four-goal advantage and seeing their opponents without any reaction.

Although Gabor Ancsin scoring four in the first half, Tatabanya never came closer than two goals before the break. Wesley Pardin was having a great period between the visitors’ post, while Iosu Goni Leoz’s experience was precious in offence.

As a result, PAUC were clearly ahead at half-time, leading by four, 15:11.

The hosts needed the half-time, and another timeout, to turn things around. Down by five at the 34th minute, they muscled up their defence and changed their offensive scheme, with Vitaly Komogorov playing a more important role.

The Russian left back scored five goals in the second half, including the equaliser, 19:19, with 15 minutes left to play.

Despite that, PAUC kept the momentum and they might have smelled victory when they were up by two with less than two minutes left to play – but Tatabanya played the last possessions perfectly.

A goal by Komogorov and another from Ancsin two seconds from the siren allowed the Hungarian team to draw and save a point in what looked like a bad situation.

“I’m very proud of my team. The defence in the second half time was unbelievable. I knew we have problems in our attack, but this will be like this in the future, as we have many injured players,” said Tatabanya coach Vladan Matic. “If they would have told me before the EHF Cup group phase that after three rounds we will have four points, I would have signed it immediately.”

Logroño’s players already had their backs against the wall after only gathering one point from the first two games, but they quickly gained momentum tonight against Berlin.

Logroño’s back court players set the tone for the evening in the opening minutes – especially Lazar Kukic and James Scott Junior, who caused some trouble for the German side’s defence.

But the duo were not prolific enough to shake off Berlin’s resistance, though, as Jacob Holm kept his team in the game – and Berlin were only down by two at half-time (13:11).

With their main duo always in the spotlight, the Spanish side carried on pushing when they came back from the dressing room.

When Sergey Hernandez added a couple of saves to the equation, La Rioja broke away on the scoreboard and led by five in the 37th minute (17:12).

Though the visitors never truly recovered from this bad period, despite Jacob Holm and Marko Kopljar making the most to reduce the gap, they did come back within one with less than two minutes to go.

But Erik Balenciaga’s hands did not shake when it came to scoring the decisive goals in the dying seconds of the game. And neither did Sergey Hernandez, who saved Jacob Holm’s last attempt on the siren to give Logroño their first win of the group phase (26:25).

"They are a great team but, in my opinion, we deserved a victory like this one. Last year we nearly got Berlin here in Logroño and in Berlin, but after matches like Tatabanya, today is a major morale injection," said Logroño La Rioja coach Miguel Angel Velasco.