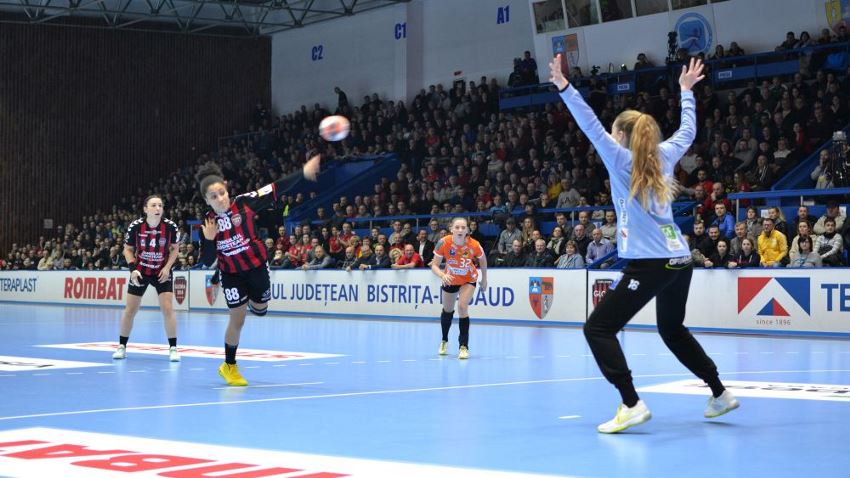 It took them four rounds, but Bistrita finally got their first win in the group, 25:23, against Odense, with a three-way battle for the two quarter-final berth ensuing in the aftermath.

After their third loss in a row, 29:23, against ÉRD, MKS Lublin S.A. are the first team in the group to be eliminated from contention for a quarter-final berth.

It was a huge chance for ÉRD to take advantage of Lublin’s woes and earn another win, but a loss for the Polish side would have also meant that they are out of contention for a quarter-final berth.

An injury-ravaged Polish side only managed to put together an 11-player squad, with only nine outfield players. And the lack of depth was their undoing.

However, the Polish champions started the game well and managed to hold the lead, as ÉRD relied heavily on experienced right wing Alexandra do Nascimento, who scored seven of her side’s first nine goals. It was the sign that Lublin’s defence was beginning to crumble, yet the hosts still managed to keep the game tied, 10:10, after 18 minutes.

A 4:1 run to end the first half was the first step for ÉRD to seal the win, as right back Nikoletta Kiss scored three times in a row to help the Hungarian side earn a 14:12 lead at the break.

There was no comeback attempt from Lublin, as their attack faltered, while Kiss and fellow left back Marketa Jerabkova took ÉRD to a 19:14 lead with 20 minutes to go.

Another 6:2 run for ÉRD secured the win for the Hungarian side, their second in the group, while Lublin lost their third game in a row, 29:23.

The Polish champions are mathematically now out of contention for a quarter-final berth, joining Magura Cisnadie as the only teams to be eliminated.

ÉRD are now second in the group, with five points, one more than Bistrita.

The team with the best defence and the best goal difference in the competition was heading to Bistrita with a win meaning that they would already be through to the next phase of the competition. But the Romanian side put serious pressure over Odense one week ago, as the Danish team secured their win in the last 20 minutes of the game.

With a sold-out arena behind them, the Romanian side enjoyed a bright start to the game, limiting Odense’s attack to only seven goals in the first 15 minutes. With the right flank being heavily used, as right wing Mariana Costa scored three goals and Belarussian right back Nataliia Vasileuskaya added another two, Bistrita jumped to a 8:7 lead.

The Romanian side learnt the lesson from the first game and protected the ball better, while displaying a 62 per cent shot efficiency to lead at the break, 13:12. It was a matter of Odense stopping Vasileuskaya, who had scored five times in the first half, but it was still Bistrita who were leading after 40 minutes, 18:16, as Odense could not find their rhythm.

But Odense’s experience played once again in their favour. A 4:1 run, powered by the same uncanny playmaker Nycke Groot, helped the Danish side take the lead for the first time, 20:19, with only 10 minutes to go. Yet it was not over.

Bistrita produced their own 4:0 run to take back the lead, 23:20, which would never relinquish until the end. With Vasileuskaya and Costa leading the line, combining for 14 goals between them, while line player Daniela Ratiu had a flawless game, with five goals from as many shots, Bistrita won their first ever game in the Women’s EHF Cup, 25:23.

The Romanian side, currently placed third, are only one point behind ÉRD and will have the chance to eliminate the Hungarian side in the last game in the group.