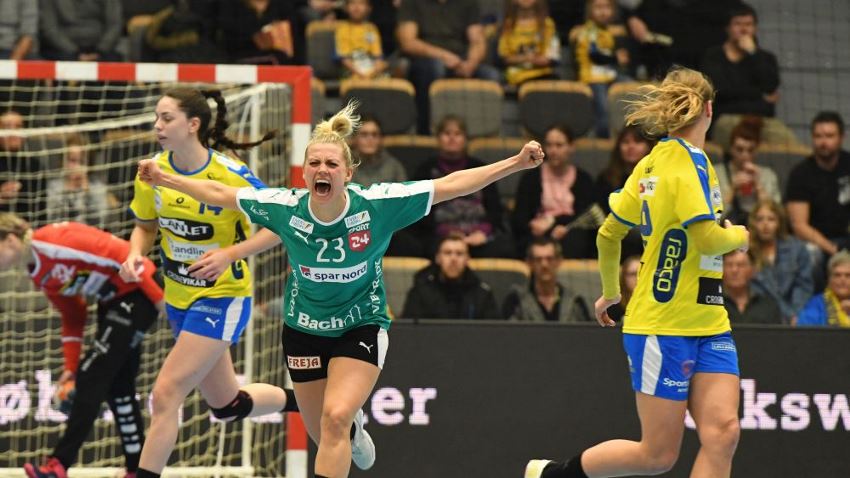 Viborg HK and Siófok KC Hungary had completed the Women’s EHF Cup Group Phase with a perfect record, while Team Esbjerg had dropped just one point. The three clubs, who all finished in first place in their respective groups in the group phase, won away from home in the quarter-final first leg matches and are close to progressing to the semi-final stage.

Esbjerg's overwhemingly powerful second half performance against Kuban has placed them in overwhemling control of their tie, securing a 13-goal lead heading into the second leg. Whilst Viborg and Siófok did not win by 13 goals, they also claimed big wins and head into the second leg matches with superb chances of progressing.

In the previous rounds of this season’s EHF Cup, Kuban had created a lot of problems for themselves but ultimately found the resolve to advance.

However, Esbjerg’s 13-goal away win leaves the Russian team with a mountain to climb in the return leg, and it is highly unlikely that Kuban’s EHF Cup run will end with a happy ending.

For Kuban, whose head coach Evgenii Trefilov is still in hospital after heart surgery, the result is especially frustrating given that they led at half-time. Yet after the break, Esbjerg were simply unstoppable and scored an astonishing 23 goals.

Diana Golub made a positive impact again, netting seven times for the hosts, but the absence of injured playmaker Yaroslava Frolova took its toll in attack.

And in the Danish team, left back Estavana Polman scored nine goals, while line player Vilde Ingstad added eight more. With a 77 per cent shot efficiency, Esbjerg took a huge step towards the semi-final.

Team Esbjerg coach Jesper Jensen highlighted a defensive change as being influential to his side's second half performance. "In the break we changed defence, and we scored several goals on fast breaks. We have created a good groundwork ahead of the return game in Denmark," he said.

"We had a good first half, in which everything worked out - the defence worked and we successfully played in the attack. In the second half, it all broke down. We missed a few easy goals and were unable to return to the game," said Denis Sayfulin, Kuban coach.

In the Danish league this season, both meetings between Nykøbing and Viborg were won by Nykøbing. However, the Women’s EHF Cup is a different competition, and Viborg look to be a major force in Europe. The eight-goal victory in Naestved was their 13th win in 13 matches during the campaign, which they started in Qualification Round 1.

The visitors boasted a solid defence, with Rikke Poulsen shining in goal. In attack, left wing Ann Grete Norgaard Osterballe and left back Line Haugsted were a big threat, ending up with nine and eight goals respectively.

Viborg led by seven goals at one point in the first half, but a series of their mistakes helped Nykøbing slash the gap to 16:11 at half-time.

Most of the second half featured a balanced game, as Viborg’s attacks were not as sharp as before. Yet in the final phase of the match, the visitors increased their advantage to eight goals, which makes them clear favourites to grab the semi-final ticket.

Line Haugsted, Viborg left back, was pleased with Viborg's performance but emphasised the need for them to repeat it in the second leg. "We played very well with a lot of discipline today. In the next match we have to keep doing that and make a good performance in the defence and pass the ball quickly in the offence," she said.

As with Viborg, Siófok had won all six matches in the group phase, and now the ambitious Hungarian side showed their high quality once again, beating Storhamar by seven goals.

For Siófok’s Norwegian coach Tor Odvar Moen, this match was special as it took place in his home country. Moen was hardly pleased at half-time, as his team faced strong resistance from Storhamar. The visitors’ defence struggled to stop Betina Riegelhuth, who finished the game with nine goals.

However, Siófok’s superior depth in their squad allowed them to gradually increase the advantage in the second half.

The Hungarian team punished Storhamar’s mistakes by scoring off fast breaks, and the gap increased to 23:19 midway through the second half.

Andrea Kobetic was particularly prolific in this match, finishing the match with ten goals, and her impact helped Siófok to clinch a comfortable 31:24 victory.