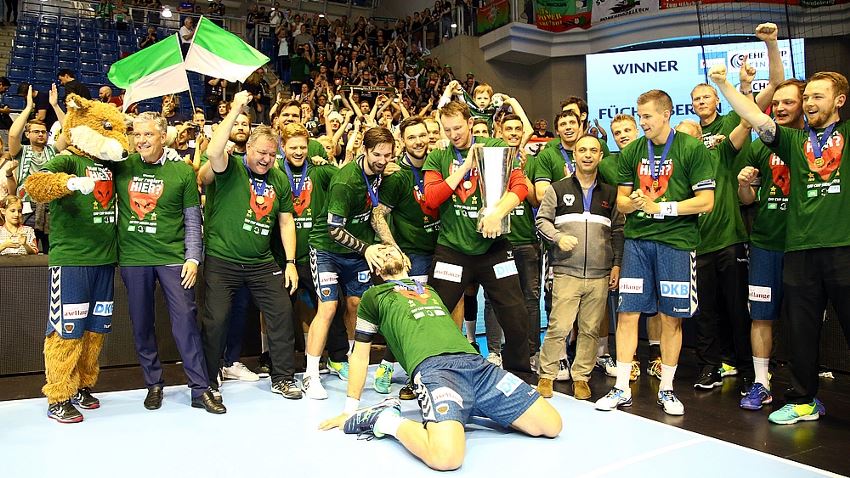 The fans were shouting “Here rules the club from the capital” as the players celebrated on the winners’ podium: After a hard fight in the final against Saint-Raphael Var Handball, Füchse Berlin became the winners of the EHF Cup 2017/18.

Thanks to a 28:25 (14:13) victory, Berlin took the trophy for the second time after 2015, when they won the final on home ground. In total, it was the 19th win for a German club in this competition, and the fifth since the start of the new format.

"I feel a great pleasure I cannot hide. I am so proud of what my team delivered in the last days," said Berlin coach Velimir Petkovic. "I am proud to coach this team. Other teams have qualities. My team is something special. Al players have shown a great, unique character. This character is the key for our current high-flyer in all competitions."

• Berlin’s match winner was goalkeeper Silvio Heinevetter, with 17 saves
• After contributing six goals in the final, Füchse right wing Hans Lindberg is again the top scorer of the competition with a total of 82 goals
• Raphael Caucheteux scores eight goals for Saint-Raphael to finish second in the top scorer ranking
• Magdeburg’s centre back Marko Bezjak was awarded MVP of the Ottostadt Magdeburg EHF Cup Finals

Füchse Berlin are the new champions of the EHF Cup, but Saint-Raphael were well-deserved finalists, standing strong for 60 minutes in a match decided in the last 70 seconds.

"Füchse were better in this final. We have to say thanks to the fans for this incredible atmosphere. The whole event was a big promotion for handball. To experience this atmosphere is why we train so hard every day. We are sad, which is normal, but we will work hard to come back," said Saint-Raphael coach Joel Da Silva after the match.

Funnily enough, the fans of Frisch Auf Göppingen and SC Magdeburg had decided to support the underdog – not their compatriots from Berlin. Boosted by this atmosphere and four saves by goalkeeper Mihai Popescu (awarded best goalkeeper of the tournament) within the first five minutes, Saint-Raphael created an early lead at 3:0.

But with the hammer goals of Paul Drux and the improvement of goalkeeper Silvio Heinevetter, Berlin turned the tide quite early and easily: The ‘Foxes’ scored five unanswered goals and even extended the margin to 9:5, forcing Saint-Raphael coach Joel Da Silva to take his first timeout.

Though Berlin’s Scandinavians Matthias Zachrisson (four goals before the break, nine in total to finish as Füchse’s top scorer) and Hans Lindberg (five in the first half) were unstoppable on the right side of the attack, the French club came closer and were down by only one goal at the break (13:14). Their top scorer Raphael Caucheteux was also on fire, netting six of his eight goals before the break.

Berlin had the better start to the second period, forging ahead to their first five-goal advantage at 19:14 within only seven minutes. Heinevetter was on a high with many impressive saves, the defence stood like a solid rock – and so Berlin quietened the Saint-Raphael and neutral fans. The Füchse drums soon became the dominant sound in GETEC Arena.

Saint-Raphael tried everything and found their way again after a change of goalkeeper: Alexandre Demaille had arrived between the posts, and his performance equalled Heinevetter’s. Thanks to him, the visitors reduced the margin to 20:22.
Even a red card after three suspensions against Alexander Lynggaard did not stop Saint-Raphael in the thrilling end to the game, when Spanish EHF EURO champion Daniel Sarmiento became the key factor for the French team.

But it was Artsem Karalek who made the fans go wild again, as he reduced the gap to 25:26 with his fourth goal with less than two minutes remaining – and his side were at a one-man advantage. Despite being shorthanded, Zachrisson netted for 27:25, and a Saint-Raphael turnover followed for Paul Drux to score the final shot – the rest was pure party.