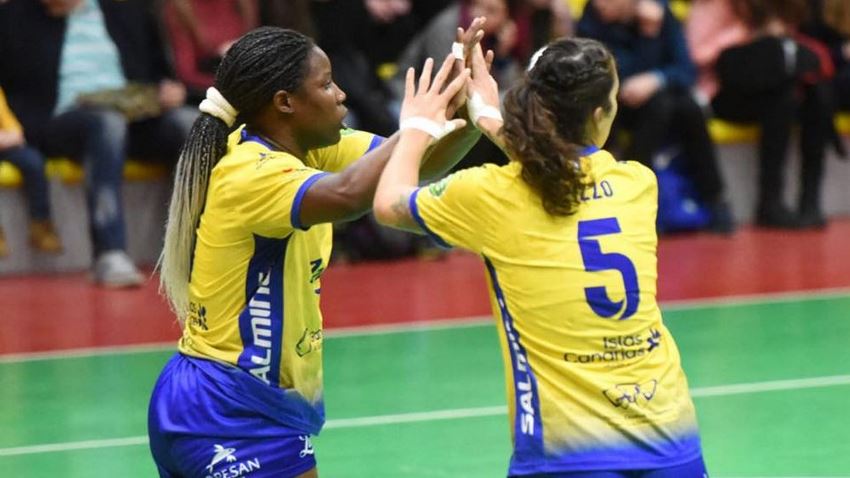 A penalty shootout was needed to find a winner of the quarter-final tie between Rocasa Gran Canaria and HC Gomel in the Women’s Challenge Cup.

120 minutes of handball could not separate them, both teams won their home games 24:18, which made the duel from the penalty line necessary, which Gran Canaria won.

After Rocasa won the first leg 24:18 at home last weekend, the Belarusian side had plenty of work to do in the return match at Gomel’s Sport Palast.

HC Gomel were leading by three goals a couple of times in the first half, but Rocasa managed to catch up pretty fast on both occasions, and at half time, the visitors were even leading 12:11.

After Gomel took the lead at 19:18, Rocasa failed to score in the final 14 minutes of the match.

By scoring the last five goals of the game, Gomel managed to win 24:18, exactly the same digits as Rocasa´s home win a week earlier.

In the shootout, Rocasa regained their nerve to win 3:2 and book their semi-final ticket.

Rocasa, who won the competition in 2016 but lost the final last year, will have Swedish opposition in their effort to reach the final yet again.

In the first match at Kristianstad Arena, the home team earned a four-goal lead twice in the first half, but Nis managed to catch up on both occasions and held a 15:14 lead at half-time.

In the second half, Nis held on to their lead for a short period before the match changed completely.

Kristianstad were completely dominant for the rest of the match and cruised to a 35:25 win.

This made the hosts clear favourites for the overall win, and Nis actually never managed to create any doubt about the outcome in the second leg.

The visitors did go five goals ahead at 27:22 with minutes left in the match, but the Swedish side cruised to a 58:52 aggregate win.

Quintus back at the business end

Last weekend SPR Pogon Szczecin qualified for the semi-finals by eliminating Sweden’s Boden Handboll IF in a double-header.

The Polish Challenge Cup finalists from 2015 will meet H. V. Quintus next after the Dutch team followed their 29:26 first leg win in Spain against Rincon Fertilidad Malaga with another narrow win at home in Kwintsheul.

Quintus celebrated their second semi-final berth in three years with a 34:31 victory, in which Lisanne and Anouk Zwinkels combined for 15 goals.