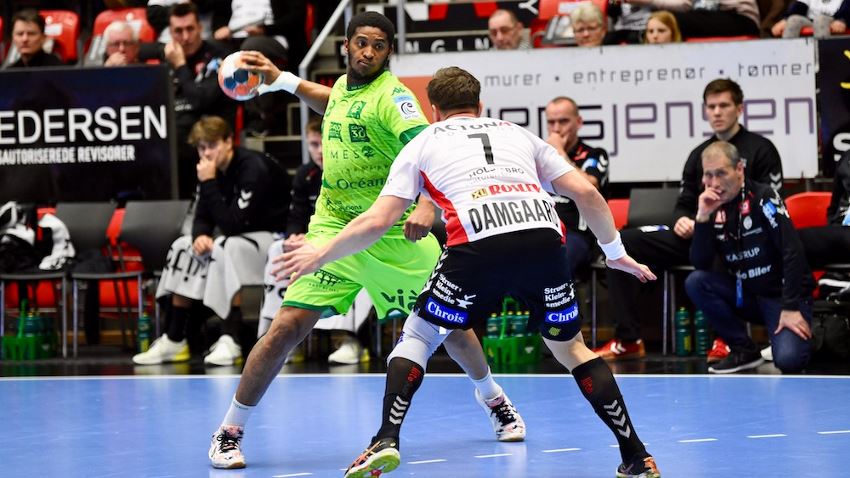 USAM Nimes Gard may still hope to reach the quarter-final of the Men’s EHF Cup after their 30:28 win in Denmark on Saturday afternoon.

A fine comeback at the start of the second half was not enough for the Danish home team, who were ultimately overthrown and suffered their third straight loss.

It was virtually do or die in Gråkjær Arena in Holstebro on Saturday afternoon, where the losing side would no longer have much hope of reaching the quarter-final.

As it turned out, Nimes proved able to fight off a fine Holstebro comeback early in the second half to secure a two-goal win after a dramatic match.

A good performance by Remi Desbonnet in goal in combination with several mistakes and hasty shots from Holstebro gave Nimes the far better start. The visitors were leading 5:2 and 10:6, and at half-time, the French side were still three goals in front.

It only took Holstebro the first 10 minutes of the second half to catch up and pull ahead 20:19, but Nimes were able to answer back and the victory was sure when they secured a three-goal edge in the last minutes.

TTH Holstebro head coach Patrick Westerholm praised the quality of the match but saw the loss as a big blow to their hopes of advancing from the group phase.

He said: "The game was a good one, a very physical game. We tried to get Nimes with fast breaks, but they got too many easy goals. In the second half it’s a close game, but we didn’t have enough power in the last 10 minutes."

"It's almost impossible to get past this group now. It's very important that we get some useful experience and try to do our best in the future games," he continued.