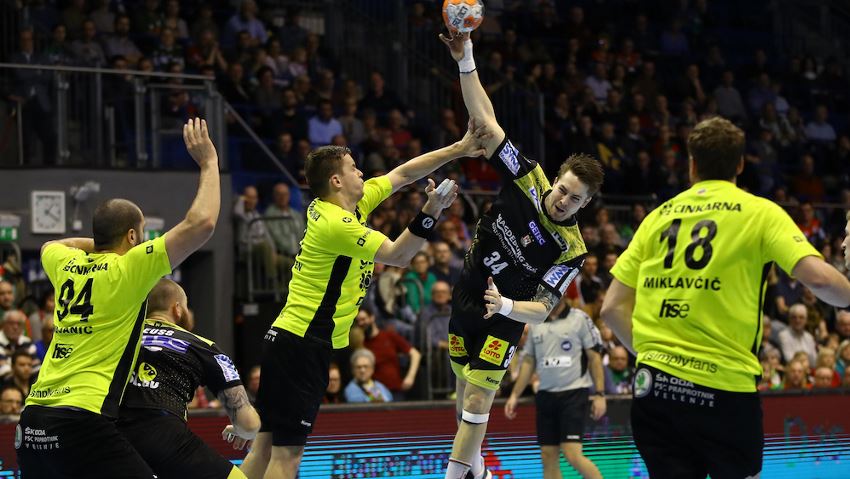 In the ‘group of death’ featuring three former participants in the EHF Cup Finals, SC Magdeburg started victorious. Despite a shaky period between minutes 20 and 40, the German side secured a well-deserved victory against Gorenje Velenje on Sunday afternoon.

The hosts began in express mode, forging ahead easily to 7:2, 10:4 and 12:6 in minute 20, mainly thanks to a great start from wing Daniel Petterson. But this 12:6 proved the turning point in the match, as Vladimir Bojanic and Vlado Matanovic took the responsibility for Velenje’s comeback.

At the break, the distance was only two goals, at 13:15. In minute 40, Estonian Andris Celmins netted for the one and only advantage of the Slovenian side, at 18:17.

Right when the match was about to slip from their grasp, Magdeburg managed to hit back. Led by the goals of youngster Lukas Mertens (five goals total) and with Petterson back on track, the German side took the lead again.

Finally, Danish Olympic champion Michael Damgaard was the key to the opening victory. After missing his first four shots, Damgaard netted three times for the comfortable 27:22 lead seven minutes before the end.

“We played our own style well. After 15 minutes, Velenje came into play and caused us problems that we didn’t solve so well in the beginning,” said Magdeburg back Christian O’Sullivan. “Then things went better and we showed that we stand together as a team and fight together. We have a lot of respect for Gorenje Velenje. They gave us some problems that we got a handle on in the end.”