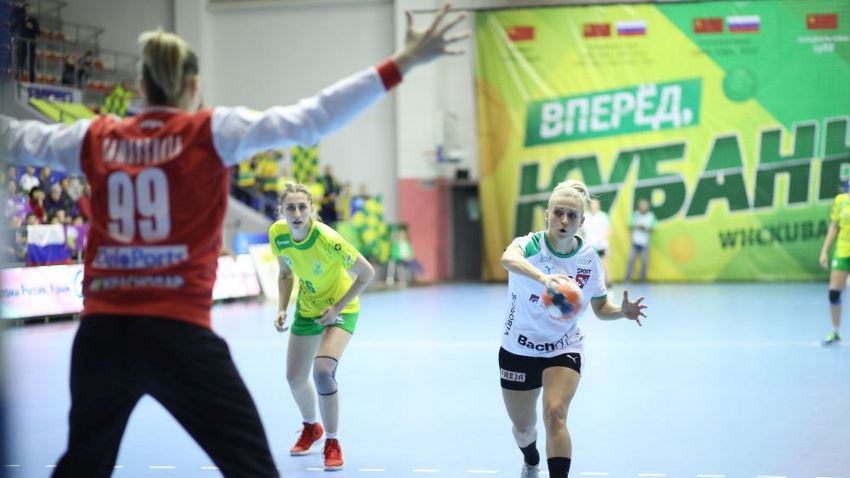 Saturday's programme of the Women's EHF Cup Group Phase saw clashes for top spot in Groups A and C, and both went in favour of Danish teams.

In a tight battle, Esbjerg defeated Bietigheim by just one goal, 28:27, while Viborg maintained their perfect record by beating Kuban away in Russia.

Both teams had been undefeated after the two opening rounds, but while Bietigheim had won both matches, Esbjerg dropped a point last week against Storhamar.

In an exciting clash with Bietigheim, Esbjerg dominated throughout most of the game, and the Danish team are top of Group A with five points.

It was a day of Dutch scorers as Estavana Polman scored nine times for Esbjerg, while Angela Malestein helped Bietigheim with her eight goals.

However, Polman recieved better support from her teammates. Esbjerg, who were four goals up at the break (15:11), extended their lead to seven goals (25:18) at one stage in the second half.

Yet Bietigheim fought hard and slashed the gap to 27:26 by the 59th minute, so the home side had some nervous moments until Estavana Polman’s crucial goal 15 seconds from the end restored a two-goal advantage.

"It was nice to score at the time. Somebody had to take the responsibility and do it. The most important was to get to two points, but when you are in that big of a lead, you have to arbitrate the game sooner," said Polman after the match.

Midway through the group phase, it appears that Esbjerg and Bietigheim are the favourites in Group A. Storhamar, however, remain in strong contention after claiming two points at Magura Cisnadie.

Magura still have a theoretical chance of advancing, but with zero points after three games it is likely to be challenging for them.

The Romanian side have some good players – Emilia Moldovan and Jasna Boljevic scored six and five goals respectively against Storhamar.

Magura Cisnadie tried their best to resist in the first half, as they trailed by just three goals at half-time, but after the break Storhamar started to pull clear and clinched a 26:18 win. Heidi Loke was Storhamar's top scorer with six goals.

Siófok had already demonstrated that they are a new major force in the Women's EHF Cup in their previous matches. By comfortably beating Sävehof, the ambitious Hungarian side kept their 100 per cent record and remain top of Group B.

Romanian goalkeeper Denisa Dudu was Siófok’s heroine of the day. She conceded the first goal almost eight minutes into the match – and continued to make a number of spectacular saves throughout the match.

In the first half alone, Dudu made 11 saves as she helped her teammates to score goal after goal from fast breaks. Siófok’s advantage constantly grew, and the home side held an eight-goal lead at the break, 19:11.

There were no significant changes on the court thereafter. Dudu continued to make saves, her teammates continued to score, and Siofok’s advantage ultimately reached double digits. Simone Bohme and Camille Aoustin were Siófok's top scorers, finishing the match with seven goals each.

"It was a really tough match for us. We did everything we can with our power, but Siófok was too strong. They defended really well and their goalkeeper was fantastic. We fought as much as we can," said Sävehof coach Rasmus Overby.

"Sävehof is a team which always fights until the end. They did today too. It was a perfect day for us. Good defence is the basic for everything and if it works well, we can run. Our wingers are fast and they had a brilliant day," said Siófok coach Tor Odvar Moen.

Both sides had had a perfect record in Group C after two rounds, so their meeting in Krasnodar was a direct duel for the top spot in the group. Viborg were the better side and claimed their ninth win in as many games in the current Women’s EHF Cup season, having started in Qualification Round 1.

The game was close most of the time, but the visitors were clearly dominant in the last 15 minutes. Viborg had more power and speed, and Kuban’s defence could not deal with their back court players.

Left back Kristina Jorgensen, who had celebrated her 21th birthday two days before the game, did particularly well and finished the match with nine goals. Kuban’s Diana Golub tried to compete with her and scored seven times, but her impact did not help the Russian side to get any points.

Unlike Esbjerg and Viborg, fellow Danish team Nykøbing had lost their two opening matches and scored the fewest goals in the group stage, but they should gain some confidence after a five-goal win against Bera Bera.

With three wins in as many games, Podravka are leaders and clear favourites in Group D. Three other teams – Nykøbing, SCM Craiova and Bera Bera – are now level on two points, so the fight for the second ticket to reach the quarter-final will be tight.

After trailing at half-time, Nykøbing deserve a lot of credit for the fighting spirit that they displayed to turn the match around. Nykøbing punished the Spanish side's mistakes in attack with swift counter attacks.

NFH’s 19-year-old Dutch right back Dione Housheer was the heroine of the day, finishing the game with ten goals, while Argentine left back Elke Karsten scored seven times for Bera Bera.