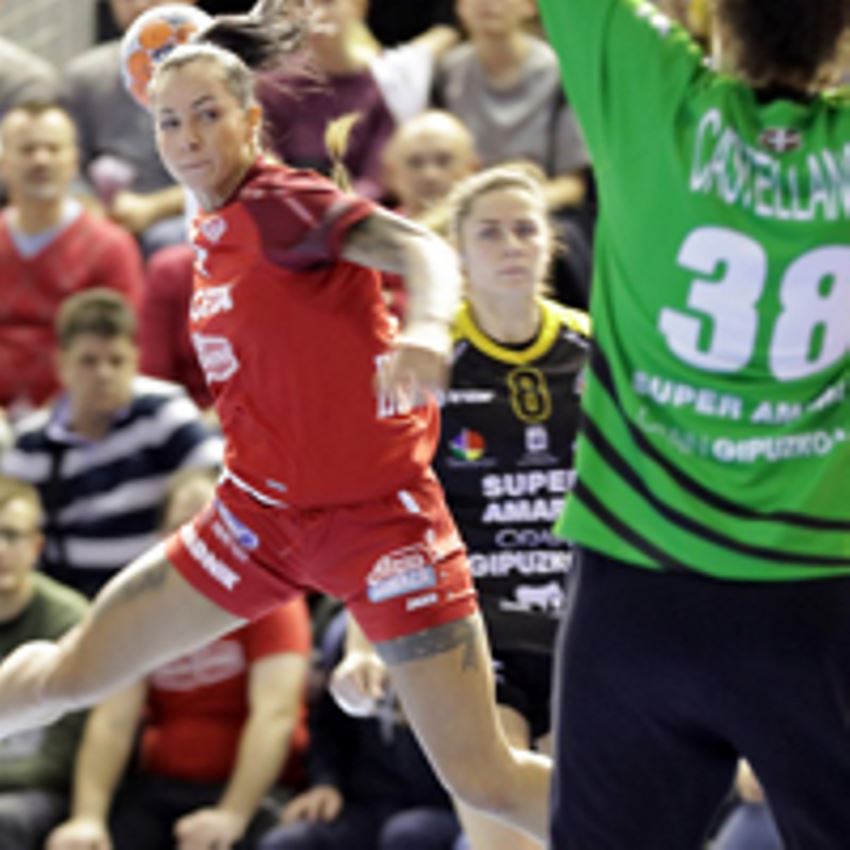 The opening round of the Women’s EHF Cup Group Phase ended with three Sunday matches, starting with Esbjerg celebrating the biggest victory in their European history against Romanian side Magura Cisnadie, while Podravka and Metzingen edged out wins against Bera Bera and Sävehof respectively.

Playing at home against Romanian team Magura Cisnadie, Esbjerg did not just claim two points, but did it emphatically, winning by 23 goals to record their biggest-ever European club competition victory – surpassing their previous record from the 2011/12 EHF Cup, where they beat Greece’s Anagennisi Artas 36:14 in Round 3.

Amazingly, the best scorer of the game was Magura Cisnadie’s Emilia Moldovan, who netted seven times. However, Esbjerg had as many as 13 players putting their names on the scoresheet with Emma Nielsen and Kristina Liscevic having the biggest impact, scoring six goals each.

The home team dominated from the opening minutes, and their 75% shot efficiency was the key to success. Leading 21:8 at the break, Esbjerg showed no signs of mercy to their rivals later in the game, scoring 41 goals by the final buzzer.

“We delivered a super-focused effort throughout the whole game,” said Esbjerg’s coach Jesper Jensen. “In our next match we play against Storhamar and it is going to be a whole different job."

Having lost all six games in the Women’s EHF Champions League earlier this season, Sävehof moved into the Women’s EHF Cup but their start has been more of the same with the Swedish champions losing to Metzingen at home.

The visitors’ playmaker Ewgenija Minewskaja was top scorer of the match with seven goals as TusSies seized the initiative from the opening minutes and did not let their advantage slip throughout the full 60 minutes.

However, the gap between the sides was never too big, despite Metzingen threatening, by pulling clear at 18:13 early in the second half, but Sävehof quickly reduced the gap.

The home team fought until the last minute, when they almost caught up at 28:27, yet the ‘Pink Ladies’ scored the last goal in this exciting match to take the victory.

”We didn’t manage to turn things completely around,” said Sävehof coach Rasmus Overby “I thought we had a good defence, but still, they scored 29 goals.”

Similar to Sävehof, Podravka had started the season in the Women’s EHF Champions League, and the Croatian side are now looking for redemption in the EHF Cup, opening with a Group Phase win against Bera Bera.

The Spanish visitors had a promising start, leading 4:1 just a few minutes into the game, but Podravka began to catch up and drew level at 11:11 in the 19th minute and just before half-time it was 14:14 before Ana Debelic put the home side ahead just one second before the break.

The second half was also up-and-down with Podravka pulling clear at 19:15, yet Bera Bera, led by Adriana Cardoso, seized the initiative to take a 24:22 lead.

However, the Croatian side did better in the last quarter of the match. Natalia Chigirinova played particularly well, and after she made the score 30:26 in the 56th minute, Podravka had no further problems clinching a victory.

“It was a crazy game,” said Podravka coach Zlatko Saračević. “There were so many turnovers and we were not good in the first half but in the end,  teamwork won, and we did not fall in the last 10 minutes like we had in the Champions League matches.”

“It was a very hard game for both teams,” said Bera Bera’s centre back Silvia Arderius Martin. “We were preparing for defence but in the second half we had a problem with it and lost a lot of balls - I think they controlled game better in the second half then us.”