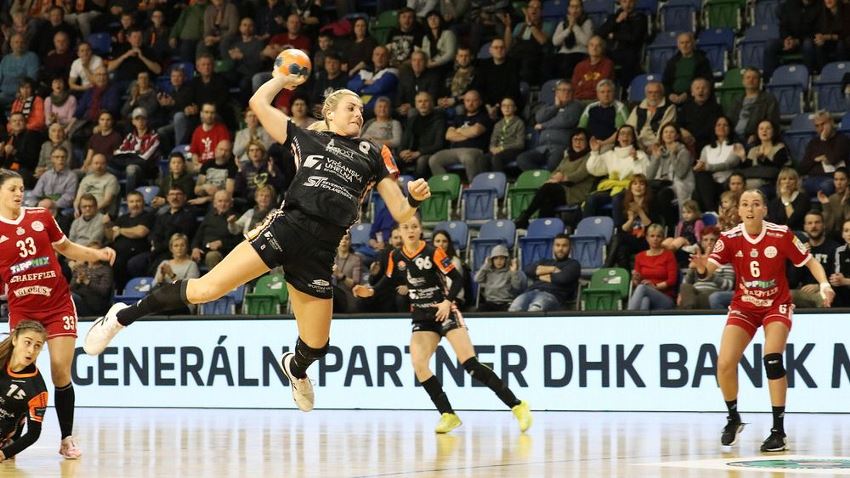 Both sides had lost the chance to reach the Women’s EHF Cup quarter-final, and their last game could not change their final positions in the group, third for DVSC and fourth for Most.

In the end, Debrecen claimed a narrow consolation victory, 29:28, and said goodbye to the tournament in style.

After five straight defeats, Most were very close to earning their first point in the group phase.

Being down 29:28, the Czech team had a chance to draw level from a penalty shot a few seconds from the final buzzer, yet Petra Manakova’s shot was saved by Viktoria Oguntoye.

Debrecen had the upper hand early in the match, taking a 4:2 lead by the 11th minute.

However, Most were determined to end their losing streak, and they fought hard.

The home side drew level a number of times during the first half, yet it was DVSC who went into the dressing room with a two-goal advantage.

After the break, Most seized the initiative for a while, and multiple goals by Jana Sustkova and Dominika Zachova saw the Czech side pull in front 24:22 midway through the second half.

Yet DVSC could rely on Jelena Despotovic, who scored seven of her eight goals after the break. Her impact helped the visitors to take a lead again before Oguntoye did her job in the last seconds.

Vilmos Köstner, of DVSC Schaeffler, said afterwards, "We knew that this will be very hard match, the atmosphere in the hall was very emotional, and I am glad that even if both teams knew that they will not continue in the EHF Cup, they didn't give up and played very good match. We take this match as an important lesson for the future, the players learned a lot today.