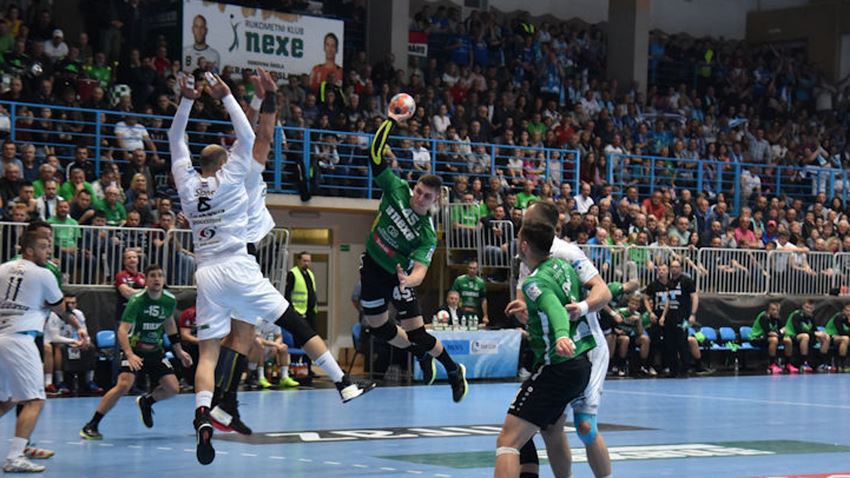 In the fifth round of the Men’s EHF Cup, RK Nexe hosted Grundfos Tatabanya KC to decide who was going to lead the quartet of clubs.

After losing by one (28:27) on home ground in their opening Group B game in February, Tatabanya got some revenge this evening, defeating host side RK Nexe by three to take a one point lead at the top of the group.

“We had an unfortunate defeat in Tatabanya, and this gave us even more strength to revisit Nexe,” said the coach of the Hungarian side, Vladan Matic. “We played well tactically on all variants of domestic defence and I think we deserved to win."

The defence from Tatabanya was excellent with great saves too, causing a lot of turnovers from the home side as the team from Hungary took the lead in the early stages.

With Demis Cosmin Grigoras’ thunderous shots, the away team increased their lead by five when Nexe coach Hrvoje Horvat called the first time out in the match after just 10 minutes, but the pause did not help as the difference became larger and the Croatian side called another break.

Though the white-shirted squad came closer, Tatabanya were able to set back the difference before the clubs went in for half-time, but the picture of the game did not change in the second half, so the result was known long before the final whistle and with this win Tatabanya now leads Group B.

In the last round the group leaders will host Rabotnik while Nexe visit Hannover.

“Today Tatabanya showed they are the better team,” said Horvat after the match. “They played a real mature match and stood firmly in defence - we did not have the right solutions.

“We may have succumbed to this atmosphere and the size of the game and we need to learn lessons from these games.”