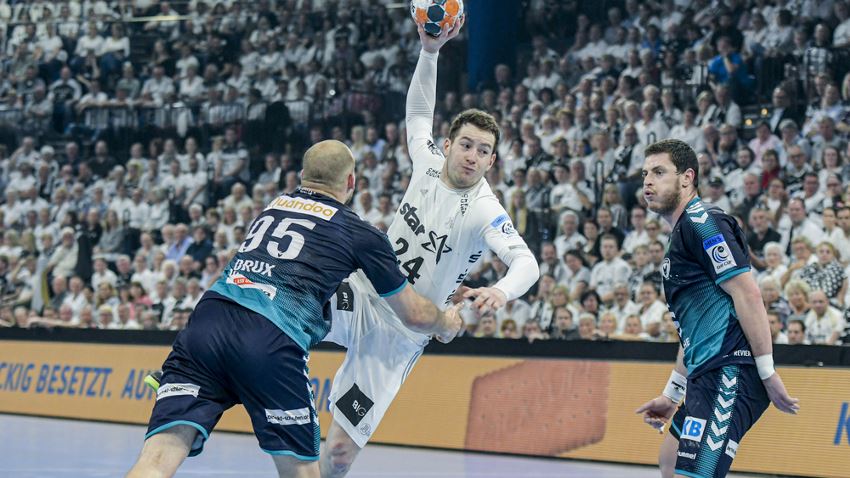 A few surprises, a favoured winner and an all-time goal-scoring record

The Men’s EHF Cup 2018/19 is over. In an amazing atmosphere in Sparkassen-Arena-Kiel, which nostalgic handball fans still call Ostseehalle, the AKQUINET EHF Cup Finals not only saw a new record attendance. They also marked the end of a competition that contained quite a lot of milestones.

Let us have a look at a few of them.

The favourite killers from Portugal

FC Porto Sofarma entered the competition with a squad that had the potential of making it far. Furthermore, the team from Portugal’s second largest city had a coach who knows what it takes to win the EHF Cup: Swedish Magnus Andersson had already won the competition twice while in charge of German club Frisch Auf Göppingen.

In the third and last qualification round for the group phase, however, Porto came up against none other than SC Magdeburg – at the time ranked fourth in the Bundesliga. At first sight, this looked like the end of Porto’s EHF Cup dreams.

After a 26:23 defeat in Magdeburg, however, Porto managed to turn the tables and clinch their group phase berth with a 34:27 win at home.

After proceeding through the group phase without losing a point, Porto went on to eliminate last season’s runners-up Saint-Raphael Var Handball in the quarter-finals.

A 30:30 draw in France was followed by a 34:30 home win for Porto, who were then ready for the AKQUINET EHF Cup Finals.

It was in Kiel that Porto’s undefeated status ended. Following a 20:24 semi-final loss to Füchse in what Andersson characterised as “probably our worst match this season”, Porto had to make do with third place after beating Danish club TTH Holstebro 28:26.

However, Andersson’s men had a lot of sympathy in Sparkassen-Arena, not least thanks to their Austrian goalkeeper Thomas Bauer, who was awarded most popular player among the fans.

“Thomas is a real showman,” as right wing Antonio Areia put it.

Füchse Berlin have developed into regular participators at EHF Cup Final tournaments. This year, the team from the Fuchsbau neighbourhood in the eastern part of the German capital played their fifth final tournament within the last six seasons.

After balancing on the edge of elimination against Danish side Aalborg Handbold in qualification round 3, Füchse won their group then had no trouble in the all-German quarter-final tie against TSV Hannover-Burgdorf.

In fact, Füchse decided everything in the first leg in Hannover, where they won as clearly as 34:26. After that victory, they did not need to give much gas in the return match, where they did what they had to do to seal a 30:28 home victory.

The winner took it all – almost

Before the start of the group phase, all the coaches pointed to THW Kiel as the big favourites to win the competition. The expectations were obviously boosted by the fact that Kiel had the home advantage at the final tournament.

And the traditional club from north Germany certainly did not disappoint.

After eliminating Norwegian team Drammen HK in the qualifiers, Kiel went through the group phase without losing a single point, and as organisers, the group win enabled them to skip the quarter-finals.

At the final matches on home ground, THW left no doubt.

After the 32:26 result against TTH Holstebro in the semi-final and a 26:22 victory against defending champions Füchse, Kiel ended as just about the most dominant EHF Cup winner in history.

The venues played a big part in the triumph, according to Niklas Landin, who was awarded best goalkeeper of the competition.

“Never before in my four years in Kiel have I experienced an atmosphere like today. It was amazing,” said the Danish international after the final.

In addition to winning the competition and having the best goalkeeper in their team, Kiel also had the Most Valuable Player. This award went to Niclas Ekberg.

“The fact that we have gone through the entire competition without losing a single point says everything about our level, I think.

“Having won two titles out of three this season, as we have also won the German Cup, has definitely been okay for us,” said the Swedish right wing.

So, Kiel won everything this year – almost.

They did not have the top scorer.

Setting an all-time scoring record for an EHF Cup season, with 100 goals, 28-year-old left wing Magnus Bramming wrote his name into the competition’s history book. His goals clearly played a great part in the Danish Cup winners reaching the final tournament for the second time, after qualifying in 2013.

11 minutes into the third-place match against Porto, Bramming scored his 100th and last goal in the competition.

At that point, he had already beaten the previous record set by his fellow Dane Hans Lindberg, who scored 92 goals for Füchse in the 2016/17 season.

“Right now, I cannot really enjoy that record, as we lost. Maybe I can in a few hours or weeks or months, but I do think we can hold our heads up high when we go home.

“We met some world-class teams here, and we did well against them,” said Bramming, before the lights went out in Sparkassen-Arena and another Men’s EHF Cup became history.

The THW triumph also marked a goodbye to their head coach Alfred Gislason – in a European context at least, as there are three match days left in the Bundesliga.

After 11 years in the hot seat of the ambitious and long-established north German club, the 59-year-old Icelandic is passing the responsibility on to another Kiel legend: Filip Jicha, who played for the club for eight years and has been working as Gislason’s assistant this season.

Now, the Kiel fans can once again salute Jicha with their classic cheer: “Hey Filip, hey!”