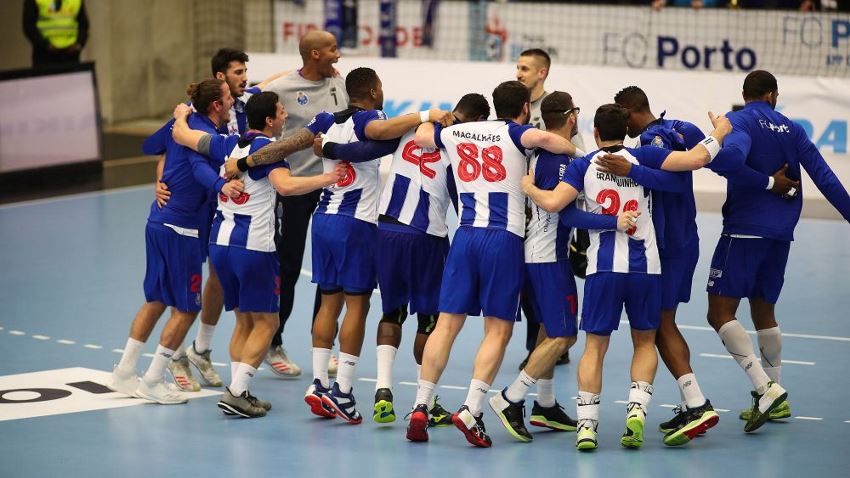 After a draw in the first leg in France, everything was yet to be decided in the Men’s EHF Cup Quarter-Final second leg between FC Porto Sofarma and Saint-Raphael Var Handball. But tonight, at home, the Portuguese side grabbed their first ever ticket to the AKQUINET EHF Cup Finals. Porto will also be the first team from Portugal to reach this stage of the competition.

Porto relied on their attack again and proved to be unstoppable as they scored 34 goals. They will join hosts THW Kiel and TTH Holstebro at the AKQUINET EHF Cup Finals.

The first half was a close matter as both teams remained neck-and-neck for most of the first 30 minutes. Vadim Gayduchenko was the most prolific scorer for visitors during the opening period while Miguel Soares Martins scored four for Porto. When Gayduchenko scored his third goal, the French side took a two-goal advantage for a couple of seconds – shortly before the break. But the hosts, thanks to a 4:0 series and some saves from Alfredo Quintana, turned things around to go back to the dressing room with a two-goal advantage.

The game remained close after both teams came back on the court. Martins was still firing on all cylinders for Porto, while stalwarts Raphael Caucheteux and Adrien Dipanda ensured Saint Raphael remained in the game.

But the turning point was the red card against Saint-Raphael’s defender Jeremy Toto. Without their main man defensively, the French side lost power in defence and did not score for five minutes, which was enough for Porto to break away on the scoreboard.

At the 46th minute, the hosts were five goals ahead, 27:22, and could smell the AKQUINET EHF Cup Finals coming their way. And they did not let their advantage slip away, despite the French side trying to use different tactics in defence. A final goal by Andre Gomes sealed Porto’s place in the finals with a 34:30 second-leg win.