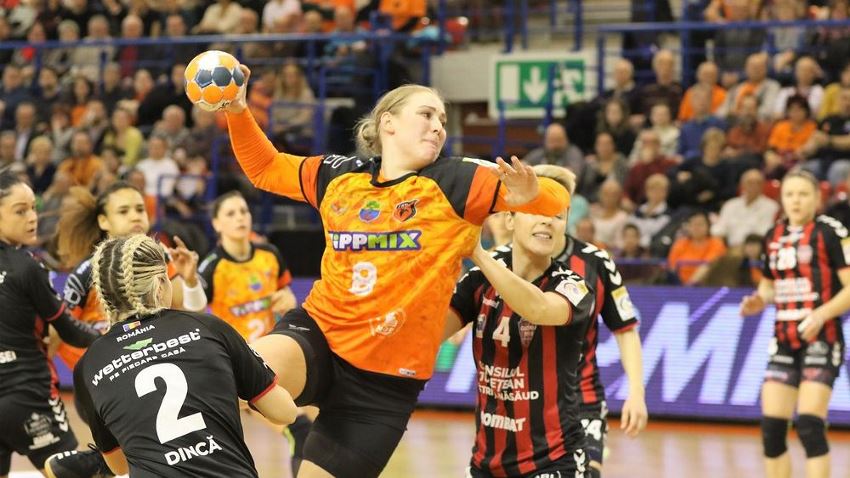 For most of the second half, Bistrita controlled the game against ÉRD, but they were down by one with 15 seconds remaining.

Veteran left wing Valentina Ardean Elisei saved the Romanian side with the final goal, tying the game with one second to go, 24:24.

Despite having only nine players in the team, Odense claimed another strong win against Lublin, 33:20.

It was a do-or-die situation for the Hungarian side, as only the win would have seen them through to the quarter-finals for the second time in their history.

But Bistrita had a great defensive record, with only 23 goals conceded per game and they were going to put that to good use.

Indeed, ÉRD needed nearly five minutes to score their first goal of the game, but Bistrita slowly lowered the tempo and let the defence take over.

Distributing the ball well, Bistrita fired from all cylinders to open a 8:6 lead after 23 minutes, but the hosts managed to play to their strengths and tied the game, 12:12, as Jelena Lavko and back Gabriella Toth scored three goals apiece.

Three consecutive goals from Bistrita’s playmaker, Dziyana Ilyina, tilted the balance for Bistrita, as they still held the lead, 16:14, after 38 minutes.

ÉRD tried to muster a comeback, but they were still falling short with ten minutes to go, due to easy misses piling up.

However, the hosts took the lead in the final minute, 24:23, only to be denied by Valentina Ardean Elisei, who delivered the final blow in the final second.

In their first ever European season, Bistrita sealed the quarter-final berth with an amazing display, losing only one of their six games.

Edina Szabo, ERD head coach, was very gracious in the circumstances, "I would love to congratulate our opponent tonight for the qualification to the next round which was going to be an historically great result for any of the two teams. The moments we are witnessing and going through are really sad and devastating ones but the life always goes on from here on out.

"Last but not least best of luck for CS 2018 Gloria Bistrita-Nasaud regarding the knockout stage."

Bistrita's Mariana Costa knew what a tough task lay ahead, "We knew coming into this game and to this environment that it would take a whole lot for us to make the qualification happen and we fought as a team believing in ourselves until the very end." 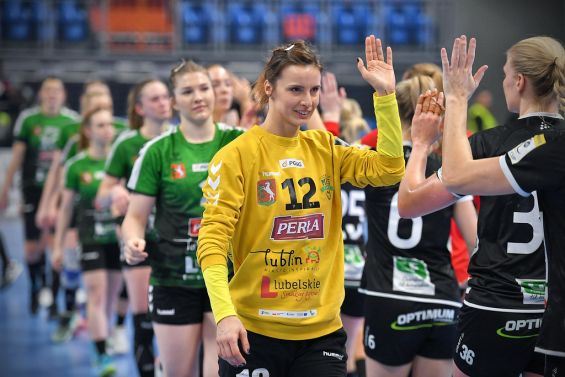 Lublin were playing only for their pride and to snap a four-game losing streak against group leaders Odense, but it ultimately proved not to be enough for the Polish champions.

Already having secured first place in the group, Odense had only nine players on the match sheet, as stars like Nycke Groot and Tess Wester did not make the trip to Poland.

But Odense were far from depleted. With left back Ingvild Bakkerud in fine form, Odense rode a 4:1 run to claim a 8:6 lead after 12 minutes.

Back Karolina Kochaniak had a flawless outing, scoring five times in the first half, but it was still Odense who led the game at the break, 14:13.

Lublin tied the game to start the second half, but a 7:0 run for Odense, spurred by the same relentless Bakkerud, who scored five of those goals, sealed the deal for the Danish side.

With their fifth win of the group, 33:20, Odense topped the table with a +42 goal difference.

With just nine players available, Odense coach Karen Brødsgaard recognised how well her team performed, “We entered today's game with limited resources. We still have issues with some injuries on the team, and due to this our objective for today was just to fight as much as we could. I think the team did that. Today was a fantastic performance, and obviously we are happy to finish the group phase with this final win.”