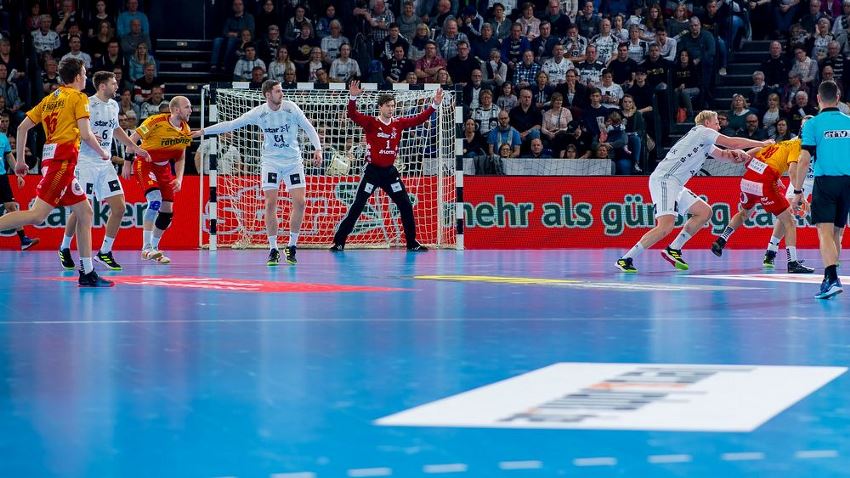 Kiel book their ticket to the AKQUINET EHF Cup Finals

Niklas Landin returned to where his successful career began, and the THW Kiel goalkeeper returned from his former club with a ticket for the AKQUINET EHF Cup Finals.

European, world and Olympic champion Landin, who had played for Gudme from 2006 until 2010, before he left for Germany, was one of the key players in the 26:22 away win of THW, meaning the hosts of the EHF Cup Finals have already secured the top spot in Group D and skip the quarter-finals.  But in the decisive stage, it was Kiel’s second goalkeeper Andreas Wolff, who turned the match around and secured their fourth win in their fourth group match.

As Kiel directly qualified for the final tournament, only three quarter-final pairings will be played and the fourth best second ranked team will miss the knock-out stage - like in all previous seasons, since the competition merged in 2012. All hosts, including Kiel, now have qualified that way. But winning the re-match against GOG had been much tougher than the first duel last weekend.

“GOG for sure will be stronger than in the first leg.” Kiel’s coach Alfred Gislason was completely right, as the Danes - boosted by 4000 fans in the sold-out arena - played much stronger than they had one week ago, when they had been beaten 23:37 at Kiel.

The defence was more aggressive, the attack was more patient and efficient, and the start was successful.  The first half was fully equal, the lead changed five times, the match was back and forth - and Kiel were lucky to take a one-goal lead to the dressing rooms.

Steered by Icelandic youngster Odinn Rikhardsson and backed by the saves of Norwegian veteran goalkeeper Ole Erevik, GOG had their strongest period after the break, constantly being ahead until minute 48. But the Danish side could not cast off the three times EHF Cup and Champions League winners, who then turned the match around thanks to Wolff.

Kiel netted six unanswered goals to decide the match four minutes before the end at 25:20 - and made their 500 travelling fans jump for joy.

Gislason gave great prasise to his side's opponents after the game, "We expected a difficult game. GOG has a really talented team. I think they were a little bit choked when they played in Kiel in the big arena in front of many spectators. So, we knew it would be difficult today and I think they showed what a talented team they have. I think our players were a little bit surprised how well GOG played in the first half.

"In the last 15 minutes we needed to play hard to get the two points. But then a player like Duvnjak showed how important he is for us. So, I’m really satisfied with my team today and that we are going to play Final 4 at home. But I am sure, that the young players of GOG – Møller, Lindenchrone and Lærke. Some day they can be world class players. Also the wing players. The islandic player Rikhardsson and Emil Jakobsen on the other side. Very talented players."

Niklas Landin seemed pleased to be back on his old stomping ground, "It was a really cool game and experience to play against GOG in a full arena. It gave me extra motivation to play against my former team here and I think the atmosphere here was really good from GOGs fans and our fans as well.

"We knew it was not going to be the same game as in Kiel. We are very happy with the two points and that we know are going to play the Final 4 at home."

Lasse Møller of GOG felt the experience was beneficial, "It was really fun to play this game. It was a better experience today than last Sunday. We played really good in the defence today. We follow Kiel most of the game, so it was a really good experience for our young team. We have a lot to learn and games like this gives us some of the experience we need."

Nicolej Krickau, coach of GOG, added, "We are really proud of the game today. We learned and changed a lot from Sunday to Sunday. We are very satisfied with our effort in the game. We missed a few chances in the end and did not have the small margins on our side in the end, which we needed to make the game close to the end, but we missed."