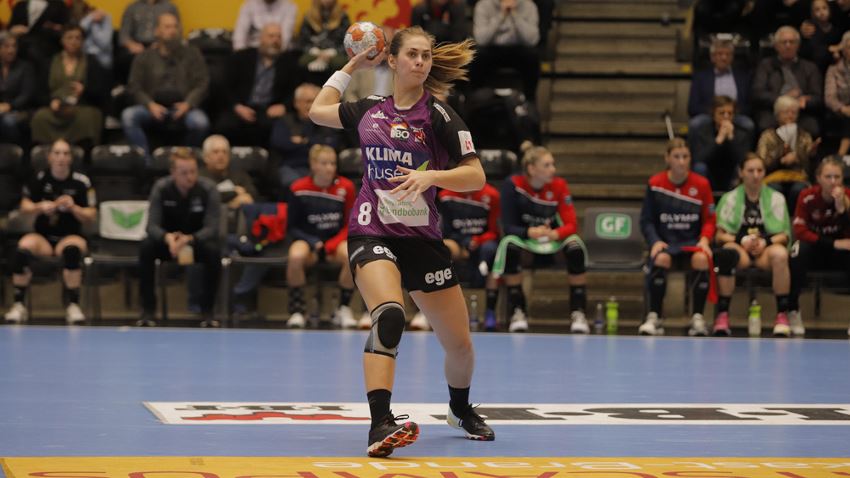 Herning-Ikast Handbold became the first team to reach the quarter-final stages of the Women’s EHF Cup after defeating SG BBM Bietigheim 33:25 at home on Saturday afternoon, while Storhamar Handball Elite got their revenge following last weekend’s defeat against Handball Club Lada, defeating the Russian side on their home court, 31:27.

Herning-Ikast made it to the quarter-finals after dominating in their home game against Bietigheim. Unlike the first meeting between the two teams, which was equal all the way, Herning-Ikast took the initiative from the start in the IBF Arena.

The Danes soon took a three-goal lead at 4:1, increasing it to four goals at 7:3 while making particularly good use of Sarah Iversen on the line.

The German visitors managed to keep the deficit to just two or three goals for a while, but towards half-time, the home side racked up a six-goal lead.

In the second half, Jens Steffensen’s team got back to where they left off before the break with their top scorer Helene Fauske at the same high level as in here previous matches.

Their six-goal half-time lead was extended to eight goals, which remained the distance at the final whistle.

The result means that the Danish club have seven points, and with all teams in the group having just two games left each, Herning-Ikast cannot be caught in at least second spot, thanks to a better head-to-head record against Bietigheim, who can only reach seven points. Storhamar can overtake them, but two teams go through from each group.

“We played a fantastic match,” said Mathias Madsen, Herning-Ikast Handbold’s head coach after the match. “We saw a lot of great performances from our players, and we controlled the match from start to finish.

“We have a solid defence and a great first phase attack,” he added. “We are really happy about the victory against a strong team and also because the victory secured our further advancement in the EHF Cup.”

His player, Tonje Loeseth, was as equally ecstatic. “We are extremely happy for our great start and the lead we got from the beginning,” she said. “19 goals in one half is amazing and for large periods we have a solid defence, thanks to our goalkeepers who did their job very well, and gave us a lot of first phase goals.

“It is great that we already have secured a spot in the quarter-finals, but now we are looking to finish in first place in our group which means we still have two important games ahead of us,” she continued. “But we are extremely proud of the fact that we already are through to the next phase.”

Storhamar avenged the 33:28 defeat at home to Lada last weekend and moved into second position in group D with their win in Russia.

Like Lada’s previous matches, left back Elena Mikhaylichenko was their dominating shooter, but not even her eight goals were enough for the hosts.
Storhamar saw their right wing Emilie Margrethe Hovden on fire with 10 goals, strikes which changed the course of the match definitively early on in the second half, as they changed a 19:18 deficit into a 22:19 lead.

Compared to the first match a week earlier, in which Lada were leading clearly from an early point, Storhamar did particularly better on away ground.

The two teams took turns at being one or two goals up, before Lada took a one-goal lead with them into the break.

After an equal start to the second half, Storhamar took the initiative completely through their four successive goals and the visitors never looked back after that to confirm their victory.

“In the first half of the match we had problems especially with Mikhaylichenko,” said Magnus Johansson, Head Coach of Storhamar after the match. “But we had a good defence and scored a lot of goals in the second half and in the end, it was a good and fair match.”

For Mikhaylichenko and her coach, Alexey Alekseev, they were could not find the right answer to the bad result.

“We played worse in our home match than in away match and I don’t know the reason why,” said coach Alekseev. “We had a very bad defence and our goalkeepers could not help us, plus we failed to score in one-on-one situations and with penalty shots.”

“We thought that we had studied playing manners of Storhamar very well especially after our away match,” said Mikhaylichenko. “We thought that it all was in our hands, but we lost, and we made a lot of mistakes in the centre – I don’t know why.”