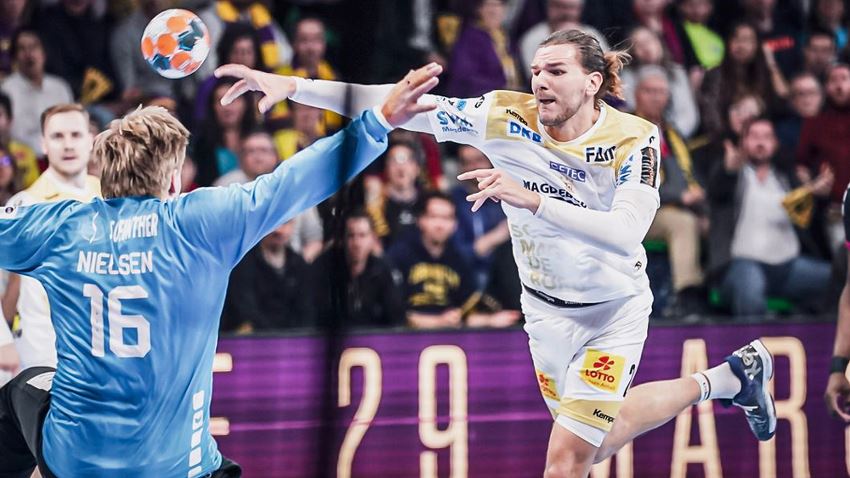 Thanks to a strong first half and a late comeback, SC Magdeburg conquered Nantes' fortress on Sunday - and remain the only team in group C with a clean record of six points.

History repeated itself in Nantes on Sunday. Almost exactly seven years after their 20:27 home defeat against Magdeburg in the EHF Cup group phase on 24 February 2013, Nantes lost again at home against the same opponents, mainly due to a weak performance before the break.

From an individual point of view it was the same story. Nantes’ former Champions League top scorer Kiril Lazarov had one goal from six attempts on his account, Magdeburg line player Erik Schmidt five from five in the first half. Schmidt added a further two goals from two attempts after the break.

After 19 minutes, Magdeburg were ahead by four goals for the first time at 9:5. In their best period before the break, Nantes reduced the deficit to 8:9, but were then overrun in five counter-attacks, including the buzzer-beating strike of Daniel Petterson for the half-time score of 15:9 for the visitors.

It looked like Magdeburg had ended Nantes’ hopes of a win – but the hosts took the upper hand thanks to a clear improvement in their defence and from goalkeeper Emil Nielsen, as well as a string of suspensions for the visitors.

Due to a 7:1 run, HBC took their first ever lead at 22:21. A previously one-sided match had turned into a thriller - but one with an unhappy end for the hosts.

Four costly errors in attack in a row by Nantes from a lead of 27:26 saw Magdeburg decide the match after a 4:0 run, securing their unbeaten streak.