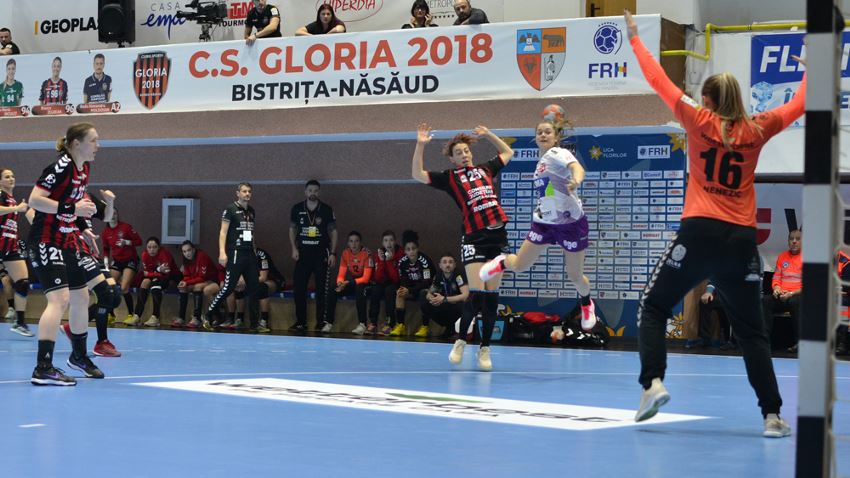 Romanian side CS Gloria 2018 Bistrita-Nasaud executed their game plan perfectly in the first half against Danish side Herning-Ikast Handbold, but their lack of experience showed clearly in a one-sided second period where the Danes outscored them 19:13, to win 29:26.

With a second leg home tie coming next Sunday, the Danish side are favourites to book a place in the semi-finals of the Women’s EHF Cup.

Herning have had mixed results in their away games this season, winning just once, 25:20, against Lada, in the group phase, but despite being the more experienced side in the competition, the Danish team faced a rookie team with a flawless home record.

And the pedigree of the Danish side was tested against Bistrita as the Romanian side jumped right at them from the gun, looking sharper from the throw off, knowing a good home result was key for their chances of progressing through to the last four.

With experienced left wing Valentina Ardean Elisei in superb form, Bistrita clicked in attack and opened an 8:5 lead after 13 minutes.

But what impressed most was Bistrita’s defence, against a Herning attack which had been effective in the group phase. The home side limited the visitor to just a 43% shot-to-goal efficiency in the first half, as their top goalscorer, Helene Fauske, who had clocked 63 goals up until this point in the competition, scored only twice.

After 30 minutes, Bistrita’s dream was still alive, as they had a 13:10 half-time lead, but going into the locker room, their thoughts were maybe on their loss against another Danish side, Odense, in the group phase, when they conceded the game in the second half, due to their lack of depth.

Bistrita needed to prevent that going into the second period, but the lesson had not been learnt.

As with any quality players, you cannot write them off and Fauske finally got into her groove, scoring three goals in a row, as her side took control of the game with a 4:1 run that sent them firmly in the lead, 20:17.

The roles were now reversed, as the visitors jumped to 67% effectiveness in front of goal, while Bistrita slumped to 57%. Having been in this position before, Bistrita tried to mount a comeback, but fell short, despite Elisei’s, who ended with nine goals, and playmaker Dziyana Ilyina’s best efforts.

Herning never conceded the lead again and lifted by Fauske’s seven goals, they clinched an impressive 29:26 win that sees them go into the second leg at home next Sunday as favourites.

“It was a tough game with a big pressure in the first half,” said Herning coach Mathias Madsen after the match. “Their defence was strong, and the fan support was great.

“In the second half we manage to play faster, our defence improved, and our attack was much better on the wings than in the first half and now we have a good chance of qualifying through to the next round.”

“Nothing is lost in handball,” said Elisei. “Anything can happen, and I believe that everything is possible. We can qualify by winning in Denmark if we play our best handball and our supporters deserve a victory.”