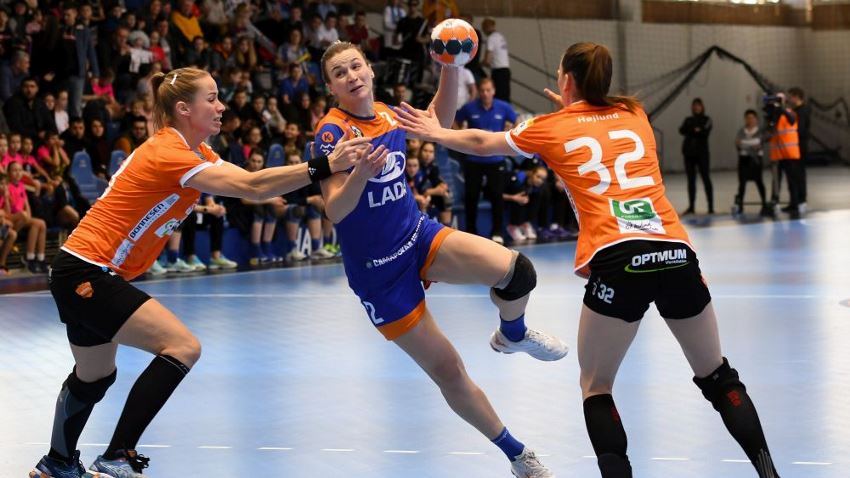 With almost five minutes to go, Lada confidently led by seven goals, 31:24, before Odense scored four times in a row and improved their chances of reaching the semi-finals ahead of the second leg.

Lada took early control of the game, and their solid defence allowed them to avoid conceding goals between the 7th and 14th minutes and to build a five-goal advantage (10:5) midway through the first half.

However, Odense gradually woke up. Their defence became more aggressive, while the Danish side's back court players combined well with the line player, Kathrine Heindahl. As a result, the Danish team cut the deficit to just one goal, 15:14, at half-time.

Lada missed two penalty shots in the game before Elena Michaylichenko’s successful attempt made the score 19:16 in the 37th minute.

A string of saves from Anastasia Lagina and Viktoriya Shamanouskaya's goals then helped the Russian side to restore a five-goal gap, 25:20.

Belarusian line player Shamanouskaya, the only foreign player at Lada, played a particularly good game both in attack and defence.

Although many of Odense’s players seemed to lack power and energy, their late resurgence certainly allows them to hope that they can gain revenge at home next Sunday.

Odense coach Karen Brødsgaard recognised that her side could not compete with Lada.

“Unfortunately, we could not match Lada today. They played very well, had a good flow in their offensive play and took advantage of our mistakes, she said."

We got a difficult start, and although we came back in the first half, we did not manage to keep up with Lada in the second half. Now we must focus on the return game in Odense.“ Victoria,

Viktoryia Shamanouskaya saw Lada's collective strength as key to their victory. She said: "All the our girls played together as a good team. It was a step forward today. We have a good beginning to the match and we are self-confident."