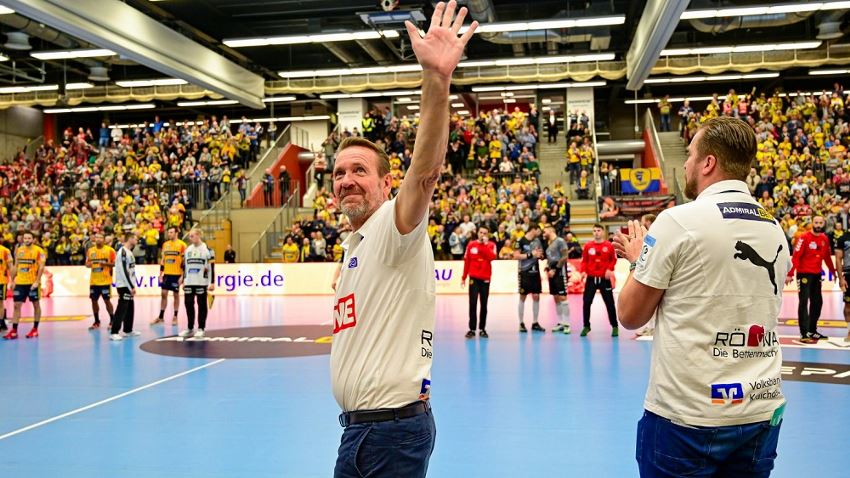 Until a few days ago, Martin Schwalb was supposed to attend the Bundesliga match between Rhein-Neckar Löwen and Hannover-Burgdorf on Saturday as a TV expert.

But things have changed: Schwalb will still be at the match - but now as the new head coach of Löwen.

A former German international (193 matches, 1984 Olympic silver and EHF EURO 1998 bronze medallist), Schwalb has signed a contract with the EHF Cup 2013 winners until the end of the 2020/21 season and returned to the bench after six years.

In 2014, he left HSV Hamburg, a year after steering them to the VELUX EHF Champions League title.

Without training session with his new team, Schwalb steered Löwen to their fourth straight win in the group phase. After the match, he spoke with europeancup.eurohandball.com about being back, his career and positive emotions.

europeancup.eurohandball.com: A clear 36:25 victory, happy fans and players, and an exciting performance – you must be 100 percent satisfied with your start?

Martin Schwalb: Of course it feels great, but you have to be humble and keep a sense of proportion. Many things went well, but we still had long periods in which we did not score. But I was happy with many things like the engagement and the enthusiasm of the players, they had obviously fun on court – and I truly hope that we can carry on like this.

europeancup.eurohandball.com: With which emotions did your mission at Löwen start?

Martin Schwalb: To be honest, with the same feelings I had six years ago and I always had. It is still the same sport, it still feels the same, like I had not been gone.

europeancup.eurohandball.com: Your time of preparation for your debut against Cuenca was extremely short…

Martin Schwalb: In the end, it was not even existing. I did not have any training session with the team, I only had the meeting with the players right before the match. The only phone call I received was from our team captain, Uwe Gensheimer, who told me that he is injured and cannot play. Team manager Oliver Roggisch and assistant coach Michael Abt did all the briefing with the team, the success was theirs, not mine. I will start the preparation on the highly crucial Bundesliga match against Hannover this weekend.

europeancup.eurohandball.com: How did you react when you received the phone call on Saturday, if you wanted to take the job at Löwen?

Martin Schwalb: It is pure fun for me to back on the big stage with Rhein-Neckar Löwen. When I received this phone call by team manager Oliver Roggisch, I felt extremely happy, because this is what I had waited for. I had some requests and offers in the previous years, but I had waited for an offer like this, when the right club calls me. I have huge respect for this task, but I feel really honoured. I am coach by heart. This club is great, the team is great, the structure of the club including youth academy is great, the fans are great and the arena is great. And I come from this region, I do not need a navigation system to find my way here. The team has a great potential for the future.

europeancup.eurohandball.com: Was it a risk for Löwen to hire someone who had not been coaching a team for six years?

Martin Schwalb: Though I didn’t coach a top team since 2014, I am still close to handball. I watch more matches than before, I worked for SKY as a TV expert and had been close to so many clubs in the Bundesliga and Champions League. So my knowledge is up to date, and I am really on fire for this job. I still lived handball in the last years, every day of those 2104 which I wasn’t coaching, I was so close to handball. This sport is my DNA. And I analysed every match I watched on TV. My wife always says: ‘Shut up please and do not comment every action. Can you just watch a match?’ No, I cannot.

europeancup.eurohandball.com: What are the major things you want and need to change?

Martin Schwalb: Handball is a team sport, and it is my biggest wish is to shape the team. There are some things in the structure of the team, mainly in the cooperation of defence and goalkeepers, that I want to adapt. And there are some processes in attack, which I want to change, many little things I saw. But definitely I do not want to implement any new hierarchy in the team. This comes by nature and experience. First, I have to do some analyse, have to talk to the players. In the near future, the opponents shall have to have more respect for the Löwen again.

europeancup.eurohandball.com: In the German Cup Löwen are already eliminated, in the Bundesliga they are six points behind Kiel. Is success in the EHF Cup the main goal?

Martin Schwalb: My goal is to win any match regardless the competition – though I know that this might not be possible, but we have to try. I really hate defeats. So yes, I want to get as far as possible in the EHF Cup for example, step by step.

europeancup.eurohandball.com: Some weeks ago, Alfred Gislason was appointed as new German national team coach. Had you been interested in this job?

Martin Schwalb: For every German coach, it is a dream to coach the German national team, and as you see, even for every Icelandic coach. Alfred Gislason is the right man for this position. He is good for the German team and the German handball. Of course, I had once said that I want to take this job, but at the moment, I dreamt to work on club level on a daily base with a team.

europeancup.eurohandball.com: Are you still the ‘volcano on the bench’?

Martin Schwalb: I am always full of emotion, but this does not mean to act like a fool on the bench. As a coach you have to infect your players with emotions, but still have to stay as you are. A team needs both – potential and emotions.

europeancup.eurohandball.com: Six years ago you suffered a severe heart attack. Are you 100 percent fit again?

Martin Schwalb: The doctors gave green light to take this job. I am as healthy as I have not been before. I stopped smoking, I only have a glass of wine sometimes. And I am full of emotion and excitement, and if you think this positive way, you are even healthier.

europeancup.eurohandball.com: You were a legend in Hamburg, steering HSV to the Cup Winners’ Cup and the Champions League trophy, and being one of the founders of the new club after the ‘old HSV’ got insolvent. Does your heart still beat for Hamburg?

Martin Schwalb: Hamburg is still in my heart, the old club, the new club, the city. I will still help this new project, though I stepped back as vice-president for as long as I am coach of Löwen. A good co-existence of Löwen and Hamburg is possible. And maybe I am still Löwen coach, when Hamburg are promoted to the Bundesliga again and we face them.