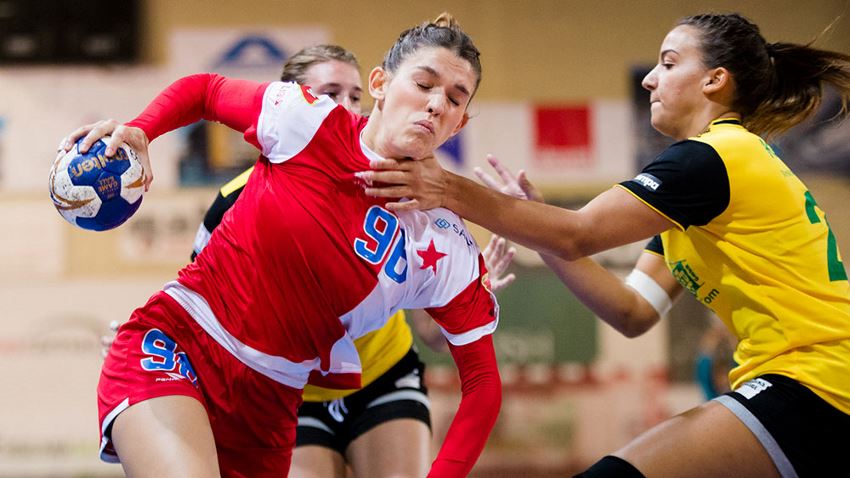 While Issy Paris Hand and IUVENTA Michalovce had booked their tickets to the second qualifying round of the Women’s EHF Cup already last weekend, 13 more teams followed their example now.

DHC Slavia Praha enjoyed an impressive comeback in the second leg match against UHC Müllner Bau Stockerau. Following a 30:24 defeat in Austria, the Czech side claimed a bigger victory in Prague (32:23) and advanced to Round 2.

Tereza Pokorna was Slavia’s driving force in that match, as the 24-year-old left back scored 11 goals.

LK Zug Handball also tried hard to overcome a six-goal deficit against Zvezda Zvenigorod at home, and a 8:4 lead midway through the first half looked like a positive sign, yet the Russian side turned things around to win 28:23.

Höör’s position looked somewhat shaky after a just four-goal home victory against Lokomotiva Zagreb (22:18). Yet in Croatia, the Swedish team had the upper had again and won with the same margin (23:19).

Two semi-finalists of the 2017/18 Women’s EHF Cup have started the new competition from scratch, and both easily overcame the first hurdle in the double-headers on home court. Playing against the Ukrainian champions HC Galychanka Lviv, Denmark’s Viborg HK won twice with exactly the same score, 33:22.

Kastamonu Belediyesi GSK, who became a sensation of the last season’s tournament, demonstrated again that they are hard to beat on home court. The Turkish runners-up had no problems against LC Bruhl (31:19, 27:27) and will face Romania’s SCM Ramnicu Valcea in Round 2.

For TusSies Metzingen, who were EHF Cup semi-finalists in 2016/17, Round 1 presented no problems whatsoever. In a double-header, the German side steamrolled Grude twice, 43:24 and 47:17, and now will get ready for the clash with Astrakhanochka in the next round.

Another Russian team, Kuban, have also learned their Round 2 opponent, which is BNTU-BelAZ. To save money, the Belarusian champions took a 1800-km trip to Luxembourg by bus, but travel fatigue did not stop them from easily beating Handball Kaerjeng twice.