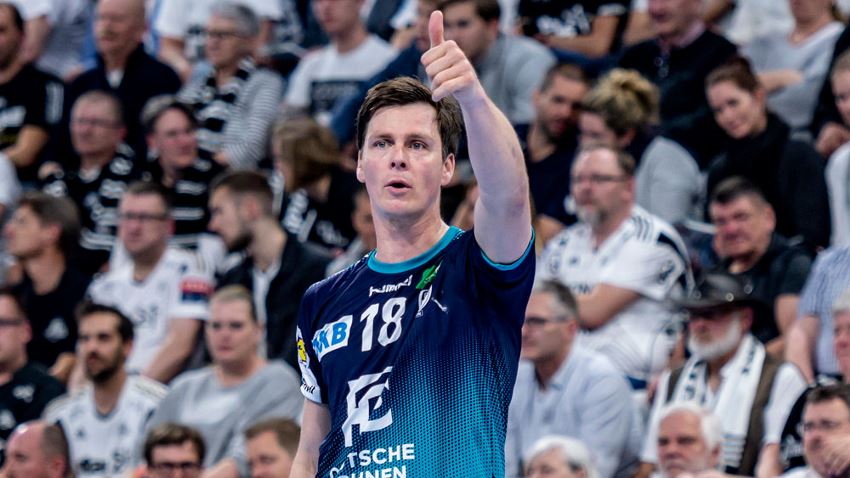 There was never really much doubt in the second AKQUINET EHF Cup Semi-final in the Sparkaseen-Arena-Kiel.

Even though the gap between the teams never rose to more than five goals, Füchse seemed to be in control all the way, and Porto’s seven-on-six attack was not really successful.

“Half of the players in the Portuguese national team play in Porto,” Porto’s Austrian goalkeeper Thomas Bauer pointed out before the match.

That experience was not enough for an AKQUINET EHF Cup Final berth for the Portuguese club, despite massive support from the Kiel crowd.

Three missed penalties played a major part, as Füchse got the upper hand from the start of a low-scoring first half.

A stellar performance from Silvio Heinevetter in the Füchse goal also played a big part, and with the two left-handed players Fabian Wiede and Mattias Zachrisson on court at the same time, the team from the German capital also got their attacking play going.

Porto caught up a few times, but towards half-time, Füchse seemed unstoppable, as they went from 7:7 to 11:7 and after that to 12:8.

Porto tried playing seven-on-six in the attack, and this paid off at first, as they reduced the distance to two goals.

Zachrisson said Füchse were worried about the tactic, but coped with it well.

"We got a bit under pressure, as they opened the second half with two straight goals, but we overcame that well too," he said.

Porto never managed to close the gap enough to challenge for the win.

Soon, Füchse were four goals up again, and although Porto coach Magnus Andersson insisted on continuing with the seven-on-six tactic, his men were not able to turn the tide. Füchse still have the chance to defend the title they won last year.

Porto centre back Rui Silva said afterwards: "I actually think we could have got more out of this match, but we missed too many shots.

"Now, it is all about winning the third place match against Holstebro tomorrow. We have met them twice this season already, so neither team can probably surprise the other one much."

.@FCPorto had a few unlucky misses in the first half. This was the unluckiest. 😶#ehfcupfinals pic.twitter.com/p2s0VIE6Tq