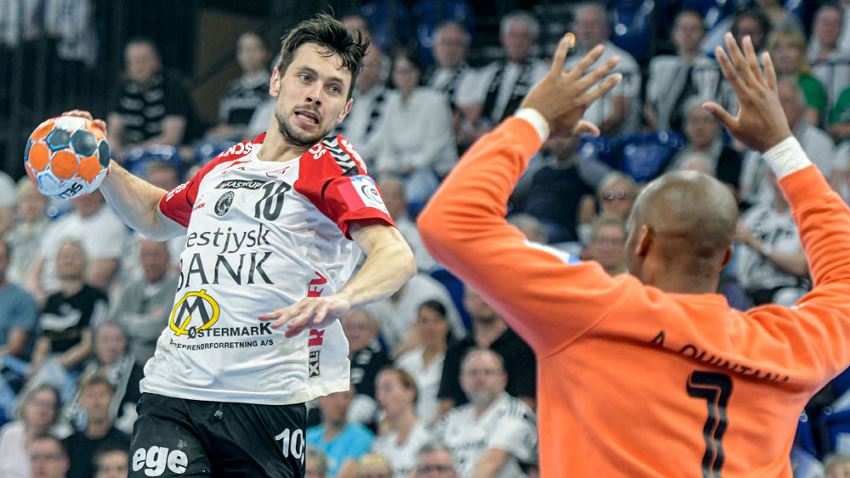 Bramming and the all-time scoring record

It has been an amazing season for Magnus Bramming so far.

Even though his team, TTH Holstebro, did not make it to the semi-final in the Danish play-off, the season was a big personal success for the 28-year-old left wing. But his success has been even bigger in the Men´s EHF Cup.

With his 100 goals, he did not only become the top scorer in the competition this season. He also set an all-time goal-scoring record in the EHF Cup, beating his fellow Dane Hans Lindberg who scored 92 goals from the opposite wing position for Füchse Berlin in the 2016/17 season.

“Right now, I cannot really enjoy that record. Maybe I will able to feel happy about it in a few hours or in a few weeks or in a few months, but not right now after we have lost,” says Bramming.

His 100th EHF Cup goal was scored almost 11 minutes into the second half of the third-place match against FC Porto Sofarma at the AKQUINET EHF Cup Finals. Despite Bramming’s four goals, his team ended up losing 28:26.

“I do think we can all go home from here keeping our heads high, as we did quite well against a couple of world class teams,” adds the fast and elegant left wing.

Credit to the team

“Of course, it is a big honour for me to become top scorer in a competition at this level, but I have to give a lot of the credit to my teammates,” says Bramming.

“Being a wing, I cannot go for the shots myself in the way the backcourt players can. I depend on my teammates providing me with qualified passes, which I can work with.

“I also have to rely on my teammates obtaining the necessary penalty shots, as I also benefit a lot from scoring from the seven-metre spot,” he says. Indeed two of his goals in Saturday’s match were penalty shots.

“Furthermore, I depend on us defending well, as good defending gives us the fast breaks, which also leads to many of my goals,” Bramming continues.

“Of course, I can benefit from time to time from making some steals in the defence myself, but on the bottom line, I have to thank my teammates for having given me the chance to score this many goals,” says Bramming.

It was actually the third year in a row that a Dane became top scorer in the competition, as Füchse Berlin's Hans Lindberg finished top of the goal-scorers’ list the two previous seasons.