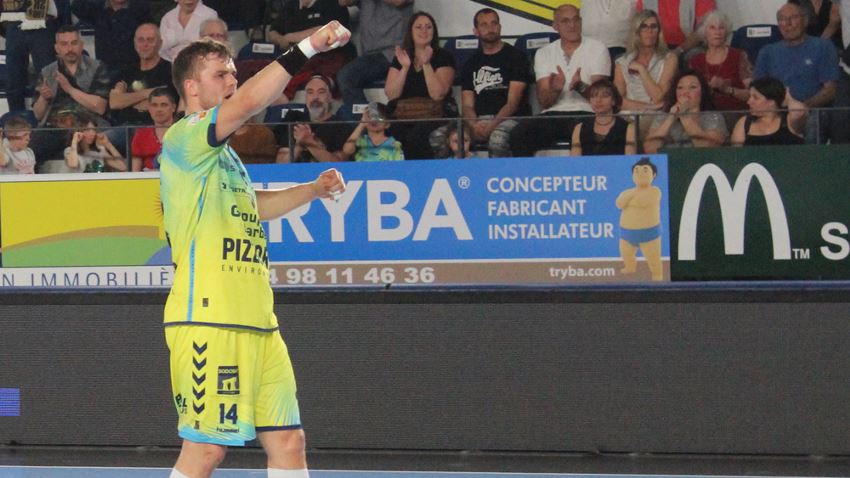 The mission for French side Saint-Raphael in this game was simple – a win would secure them a place in the first two teams of Group A, and in the second half, leading by five they looked comfortable, but Berlin pushed them in the dying minutes of the game to come back within three.

The French side entered the game reflecting their intent to win and even take lead of the group with the right goal turnaround and just after three minutes, they were two goals ahead, 3:1.

Their offence was going to be key to the game and the side from France scored 18 times in the first half alone, insisting on playing very fast on every ball. And while Berlin did their best to match their opponents’ rhythm, they lacked a little bit of efficiency in defence, unable to stop Hampus Jildenbäck and Adrien Dipanda, who scored a combined seven goals before the break. At half-time, Saint-Raphael were three goals ahead, 18:15.

But the visitors did not give up on the game.

Coming back on the court with better solutions to protect their goal, they were soon back in the game and the score was even after 38 minutes, when Mijajlo Marsenic scored his fourth goal (20:20). Mihai Popescu, the hosts’ goalkeeper, was elemental in the last part of the game. His saves allowed the home side to take back a three-goal lead, increasing it to five in the 53rd minute, when Vadim Gayduchenko netted for the sixth time.

But the experience of Hans Lindberg helped Berlin to retain control of the game as the Danish winger scored his team’s last three goals, reducing the gap to three goals at the final whistle.

“It was a very committed game with lots of goals,” said Rares Fortuneanu, assistant coach of Saint Raphael. “We are in a complicated period and it's our first victory at home in 2019 so we have to enjoy it a lot.”

Berlin’s Bjarki Mar Elísson was full of optimism for the final group game next week despite the loss tonight. “It was a really tough game against a team who fought a lot in defence where every player is really tough," he said. "We wanted to win of course, but it was really important to have the goal advantage against St Raphael on our side. It was hard during all the game and we are happy that we did not lose by more than three goals. Now it’s in our hands to take first place of the group.”