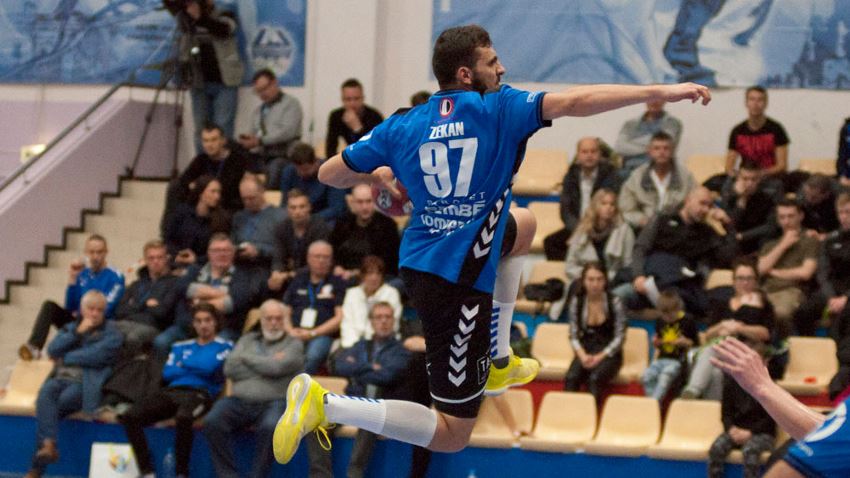 Bregenz Handball may not remember their 100th European Cup match with the fondest feelings.

In the Men’s Challenge Cup, the Austrian team lost the first leg against A. E. K. Athens 29:25.

“Unfortunately, we made too many technical mistakes and hit the goal posts too often,” explained Bregenz captain Lukas Frühstück.

Bregenz still have a good chance to turn the tide in the return game at home next Saturday, though.

In a double-header on home ground, CSM won the first leg 32:24 against Parnassos Strovolou from Cyprus. In the return match Sunday, the Romanian team were even more superior, as they won with a considerable 47:14 margin.

Thanks to a great first leg, HC Dukla Praha are in the Last 16 after this weekend’s double-header at home against Kauno Azuolas-KTU from Kaunas.

The Czech home team won the first match 27:20, which meant they could easily live with the Lithuanian visitors earning a 28:28 draw in the return match Sunday.

Big wins in double-headers, good chances for Partizan and Borac

Two other double-headers ended with huge wins for the home sides.

RK Partizan from Belgrade have a good chance to reach the Last 16 too, although it would be too early to write off their Finnish opponents Dicken.

In the Sportski Centar Vozdovac in the Serbian capital, Partizan won the first leg 33:28 after a modest 17:16 lead at half time.

Partizan may still have some work to do in the return match in Helsinki on the coming Saturday.

RK Borac m:tel seem to be close the next round after winning 23:22 away against HC Vogosca Poljine Hills in the first leg of this entirely Bosnian tie.

The match was a close affair, in which the score was even, 10:10 at half time, but Borac seem to have the edge before the return match in Banja Luka on Saturday night.